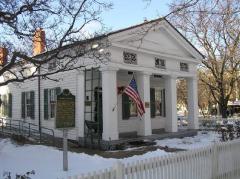 The Kempfs were the most prominent of the German families who enriched Ann Arbor with generations of music. Reuben and Pauline Kempf led simple but active lives- filled with music, lessons, concerts, and entertaining. They welcomed internationally-known musicians into their home and the community, helping establish Ann Arbor’s reputation as a world-class music site.

Reuben’s German immigrant parents owned a large farm south of town near the present location of Briarwood Mall. They sent him to Switzerland for training to become a minister, but Reuben soon found he was much more inclined toward music. In 1877 he transferred to the Royal Conservatory of Music in Stuttgart, Germany, where Victor Herbert was a classmate. After graduating in1880, Reuben returned to Ann Arbor to teach. In 1883 he married Pauline Widenmann, another Ann Arbor native of German descent and an accomplished singer who had trained at the Cincinnati Conservatory of Music. In 1888 the Kempfs moved into the former home of Henry DeWitt Bennett at 312 South Division Street. For the rest of their lives, they lived in this beautiful Greek Revival home.