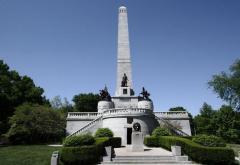 The 117-foot Tomb, designed by sculptor Larkin Mead, is constructed of brick sheathed with Quincy granite. The base is 72-foot square with large semi-circular projections on the north and south sides. Double sets of north and south stairs lead to a terrace, above which rises the obelisk. At the corners of the shaft, large pedestals serve as bases for four bronze sculptures, each with a group of figures representing one of the four Civil War services—infantry, artillery, cavalry, and navy. A taller base on the obelisk’s south side holds a heroic bronze statue of Lincoln. At the Tomb entrance is a bronze reproduction of Gutzon Borglum’s marble head of Lincoln, located in the U.S. Capitol in Washington, D.C.

Interior rooms of the Tomb are finished in a highly polished marble trimmed with bronze. The south entrance opens into a rotunda, where two corridors lead into the burial chamber. The rotunda and corridors contain reduced-scale reproductions of important Lincoln statues as well as plaques with excerpts from Lincoln’s Springfield farewell speech, the Gettysburg Address, and his Second Inaugural Address. Lincoln’s remains rest in a concrete vault ten feet below the marble floor of the burial chamber. A massive granite cenotaph marking the gravesite is flanked by the Presidential flag and flags of the states in which the Lincoln family resided. Crypts in the chamber’s south wall hold the remains of Lincoln’s wife and three of their sons.