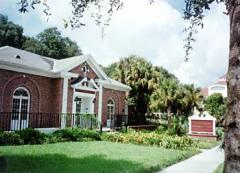 The museum is flanked by three other sites: The Matheson House dates from 1867 and incorporates elements of Classical Revival and Gothic architecture; the Tison Tool Museum contains an extensive and diverse collection of tools; and Sweetwater Park offers an outdoor walk through local history, guided by signs along a pathway. Inside the Matheson Museum building, Gainesville's old American Legion Hall, permanent and temporary exhibitions tell the story of Alachua County. Permanent exhibits offer a brief look at area history from the Timucuan Indians to the Spanish occupation of the area to William Bartram's travels and more. The Trust administers the 1867 Matheson House, the second-oldest residence in Gainesville. Built by James Douglas Matheson, an emigrant from South Carolina and a prominent merchant, the house was bequeathed to his son Chris, the city’s mayor from 1910 to 1917, a state legislator, and later, a minister. Chris’ wife Sarah deeded the house to the Trust upon her death in 1996.

A blend of South Carolina plantation and Classic Revival raised cottage architecture, the Matheson House incorporates Gothic decorative elements in roof finials and an interior stairway. The gambrel roof and ceiling to ground porch columns are uncommon in Florida. Inside, period furniture and personal possessions are a testament to a family’s history, and that of Gainesville itself. The Tison Tool Museum houses the unique tool collection of Gainesville native John Mason Tison, Jr. Built by Tison in 1993 and reconstructed on the Matheson site in 1998, the structure—and the tools it preserves—honor the skill and artistry that created Alachua County’s built environment. Sweetwater Park, located directly behind the Museum, is a joint effort of the Matheson Museum and the City of Gainesville.

Construction is scheduled in several phases: when completed, the Park will be an outdoor museum in the heart of the city. A Walk Through History, a 12-panel local history exhibition, lines the walkways that meander through the Park; the area’s natural history will soon be interpreted in native plant clusters and a formal Southern garden. (Note: Please be patient as the exhibit loads, as several of the images are quite large.) Intended also as a neighborhood and community space, the Park offers quiet benches along Sweetwater Branch Creek, the city’s original eastern boundary, and a children’s playground.