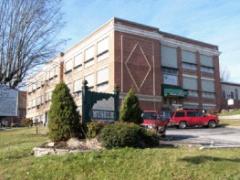 The Nathanael Greene Museum is a Greene County Museum dedicated to preserving the county and regional heritage. The museum was begun in 1983 and incorporated in 1986. At present the museum consists of ten galleries and numerous independent exhibits. The museum is named for the outstanding Revolutionary War general under whom many Greene Countians served, and for whom the town and county are named. Inside visitors can see the historical and colorful story of men and women who helped shape the history and destiny of Greeneville, Greene County, the State of Tennessee, and even the nation.