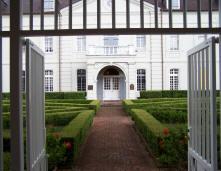 Since 1727 New Orleanians have worshipped in churches on this site. Half a dozen years earlier, the French engineer, Adrien De Pauger, who arrived in the newly founded city on March 29, 1721, designated this site for a church in conformity with the plan of the Engineer-in-Chief of Louisiana, LeBlond de la Tour, who was at the capital, Biloxi.

The new parish church, dedicated to Louis IX, sainted King of France, was thus perhaps the first building in New Orleans of "brick between posts" (banquete entre poteaux) construction, an effective method of building that continued to be used in Louisiana until at least the middle of the nineteenth century. De Pauger, unfortunately, died on June 21, 1726, before his church was completed. In his will he requested that he be buried within the unfinished building, a request presumably granted.

During the six decades that the church stood, there worshipped within its walls French Governors Perier, Bienville, Vaudreuil and Kerlerec and Spanish Governors Unzaga, Galvez and Miro. In this first little church were baptized the children of the colonists and the children of the slaves. Here were married the lowly and the highborn, and through its doors were borne the mortal remains of the faithful for the burial rites of Holy Mother Church on the last journey to the little cemetery on St. Peter Street.