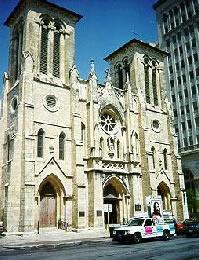 By the mid-1860s the population of San Antonio had outgrown the original structure. The present building was begun in 1868 and incorporated the old church. Designed by Francis Girard, the church has twin towers and triple portals in the Gothic Revival style. Renamed the San Fernando Cathedral, it became the seat of the Archdiocese of San Antonio. James Bowie, defender of the Alamo, was married in the original chapel and local tradition maintains that the remains of the defenders of the Alamo are buried in the new section of the cathedral.