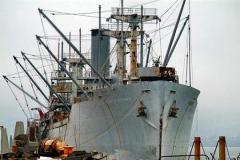 The ship has functioned as both a military and civilian vessel and its service record includes WWII, Korea, and Vietnam.

Of the 747 ships launched at Richmond during the War, only this vessel remains to tell the story of that incredible time, never to come again, when men and women from all over this country worked side by side to create the greatest ship-building enterprise the world has ever seen. In the process, Richmond, and the world, changed forever. It is the mission of this museum to show what happened in the four Kaiser shipyards during those four short war years. It is also its mission to show the history of the ships that were built here, particularly of the Red Oak herself, her service and her resurrection.