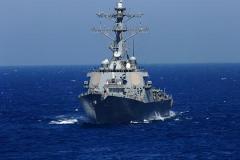 The Navy ship formed part of the quarantine of Cuba during the 1962 Missile Crisis. A portion of its interior is open to tours.

This Forrest Sherman-class destroyer is only the third of its kind left in existence. She bears the name of John Barry, an officer who fought in the Continental Army during the Revolutionary War. She served in the 1958 military action on Beirut, Lebanon, in the quarantine of Cuba during the Cuban Missile Crisis in 1962, and in Vietnam, where she destroyed 1,000 enemy structures. Some of the ship's interior is open to tours.