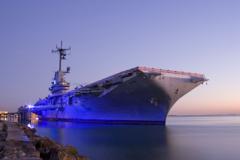 During the 1980's the U.S. Navy came to realize that keeping in service its last remaining World War II Essex Class aircraft carrier was becoming increasingly expensive and that the USS Lexington would have to be replaced by a more modern ship. In August 1990, the Secretary of the Navy announced that the USS Forrestal would replace the USS Lexington as the Navy's training carrier.

On January 29, 1991, Lexington arrived at Naval Station Ingleside and became a permanent Texas resident. On 8 JUNE 1992, the United States Navy officially signed over Lexington to city officials and on June 17, she was towed to her final berth on Corpus Christi Beach. The USS Lexington was opened to the public in October 1992, and on 14 November was dedicated in a formal ceremony attended by representatives of the City, State and Federal governments, as well as former crew members and members of numerous veterans organizations.

From the very first day of operation as a naval aviation museum, the USS Lexington has remained totally self-sufficient, never having received funds from local, state or federal government agencies. The Museum has relied solely on revenues generated from grants, donations, admissions, ship's store sales, special events, and the youth overnight program. These revenues have covered all expenses not only to operate and maintain the ship but also to fund all capital improvements as well.