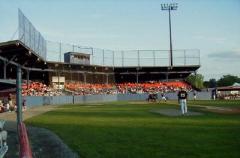 Located in Pittsfield, Massachusetts, Wahconah Park still has a wooden grandstand, a rarity in 21st century baseball. Constructed in 1919, Wahconah Park has hosted over a dozen different minor league and independent league teams, including affiliates for the Cleveland Indians, New York Mets, Philadelphia Phillies, and Chicago Cubs. Over 200 ballplayers have made it to the Major Leagues after playing at Wahconah Park.

The Pittsfield Colonials of the Canadian American Association played at Wahconah Park from 2010 to 2011, playing teams from Quebec, Newark, and Worcester. On May 3, 2009, Amherst College and Williams College played an exhibition at Wahconah to commemorate the sesquicentennial of the first intercollegiate baseball game between the two schools. Both Sports Illustrated and ESPN Classic have tried to capture the nine decades of baseball played at Wahconah Park.